Home History The Great White Fleet: All You Need to Know About Roosevelt’s Cruise, Definition, Purpose, Impact and Significance

The Great White Fleet was the popular moniker for the powerful United States Navy battleships. It conducted a round of the world. And was directed by US President Theodore Roosevelt from December 16, 1907 – February 22, 1909 to do so. Its goal, however, was to conduct pleasant courtesy visits to a variety of countries. However, it still demonstrated modern US naval strength to the rest of the globe. It consisted of 16 battleships distributed into two squadrons, as well as numerous escorts. Roosevelt wanted to show off America’s rising military might and blue-water navy capacity.

The United States Congress seized monies to strengthen American naval might. They had done so in the hopes of enforcing treaties and protecting overseas interests. This started in the 1880s with just 90 tiny ships, more than one-third of which were wooden and therefore outdated. The fleet, however, soon expanded to incorporate modern steel battle boats. The armada received the moniker ‘Great White Fleet’, since the hulls of these ships had a dazzling white paint.

If you would like to know more about this topic, you are really welcome here. Read on as we explain the ways how the Great White Fleet became a success.

The US endeavour inspired the Great White Fleet to rebuild its naval fleet with contemporary steel ships in the 1880s. The British HMS Dreadnought of 1906 was the first modern battleship which served as a model for all furthee ships. When Theodore Roosevelt became president, he made it his mission to develop a modern battleship fleet. Two important naval theorists in the United States had a significant effect on his ideas. Alfred Thayer Mahan was the first one. His two-volume treatise, ‘The Influence of Sea Power on History 1660-1783’, claimed that naval expansion was vital for empire development. William S. Sims, a veteran navy commander and longtime Roosevelt adviser, was the second one.

President Roosevelt intended to demonstrate America’s strength. He planned to deploy all of the US Navy’s battleships across the globe to show American maritime strength. The endeavour posed a vital logistical problem for the navy. None had ever attempted anything of this magnitude before.

On December 16, 1907, the US fleet, headed by the battleship Connecticut, set sail from Hampton Roads, Virginia. As the Panama Canal was still under construction, the fleet had to sail around the Straits of Magellan. The fleet featured the Kearsarge and Kentucky, the two oldest battleships. This included Maine and Alabama, replaced by Nebraska and Wisconsin. Port of Spain was the fleet’s first stop.

The ship then travelled to Rio de Janeiro, Brazil, Arenas, Chile, Magdalena Bay, Mexico. Finally, it arrived at San Francisco on May 6, 1908. The second phase of the journey took us back to the West Coast. However, this time it floated only between San Francisco and Puget Sound. On July 7, 1908, the third part of the voyage began. The fleet then travelled to Honolulu, Auckland, Sydney, Melbourne, Albany, Manila, Yokohama, Japan, Amoy, China, and back to Manila. On December 1, 1908, the fleet set sail from Manila for its last leg. The fleet made stops in Colombo, Ceylon, Suez, Egypt, and Gibraltar. Moreover, it eventually arrived back in the closing days of Roosevelt’s presidency, on February 22, 1909, at Hampton Roads.

The trip was a huge success, nevertheless. The journey involving 14,000 navy troops, went off without any major technological hiccups. The fleet also received greetings from a large gathering of people who had come to witness US’ white ships. The expedition showed that America had indeed become a world power. In international affairs, it could no longer ignore itself. America was now completely on the global scene. 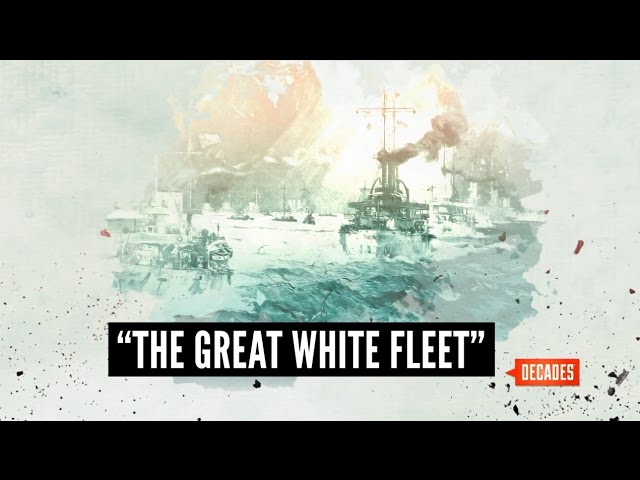 The armada had to sail through the Straits of Magellan since the Panama Canal was not yet built. The magnitude of such an operation was unparalleled in US history. Back then, ships had to sail from all points of the compass to meeting locations. Moreover, they had to proceed according to a carefully coordinating, well-conceived strategy. It entailed nearly the entire operational abilities of the United States Navy. Well, the Russian fleet had poorly planned actions on its trip from the Baltic to the $3. Nonetheless, this finally led to its annihilation by the Japanese in 1905. On the contrary, the US endeavour gained benefits from a calm climate that helped ship movement coordination. The journey itself ended up breaking a number of world records.

Thousands of people gathered at each port to witness and greet the armada. The Great White Fleet visited Monterey, California, on May 1-4, 1908. A big party took place for all the officers of the fleet. It was also at the adjacent Hotel Del Monte in Del Monte, California. In 1942, the US Navy took over the Del Monte for use as the Del Monte Pre-Flight School for pilots. Furthermore, after WWII, the Naval Postgraduate School took a transfer there. 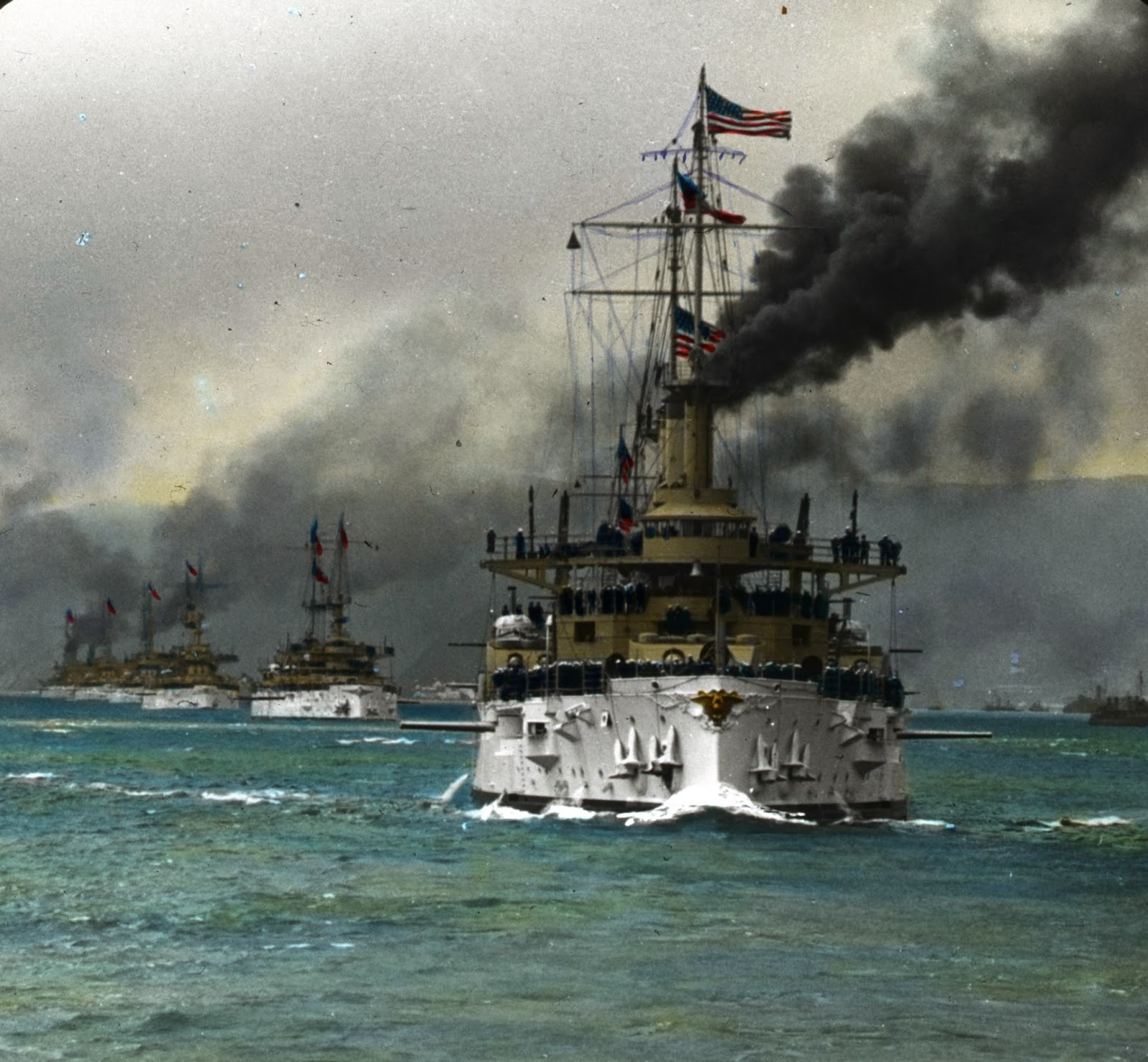 Years after its victory in the Spanish-American War, the US rapidly gained strength and repute in the international arena. Back then, it emerged into an imperial state with territories such as Guam, the Philippines, and Puerto Rico. Thus, the US believed it needed to significantly enhance its naval might to maintain its new worldwide standing. Between 1904 and 1907, the US Navy, led by President Theodore Roosevelt, built 11 new battleships. This building effort notably increased the fleet’s size. However, the combat capability of several ships degraded in 1906 with the advent of the all-big-gun HMS Dreadnought. Despite this, the increase in naval power was opportune. Japan, after triumphing in the Russo-Japanese War (victories at Tsushima and Port Arthur), posed a rising danger in the Pacific.

In 1906, a series of legislations in California discriminated against Japanese immigrants, further straining relations with Japan. These restrictions sparked anti-American riots in Japan. Eventually though, they revoked at Roosevelt’s request. While this helped to settle the situation, relations remained tense. Moreover, Roosevelt became increasingly concerned about the US Navy’s weakness in the Pacific. He wanted to signify to the Japanese that the US could easily deploy its major battle fleet to the Pacific. Henceforth, he began planning a global cruise of the nation’s battleships.

Roosevelt wanted to convey the aforementioned statement to the Japanese. Furthermore, he wanted to ensure that the Americans understood the country’s preparation for a naval battle. Besides, he also sought backing for the building of additional warships. From an operational viewpoint, Roosevelt and navy officials had an interest in learning about the endurance of American battleships. They also wanted to know how they would fare on extended trips.

Initially, the fleet was said to be going to the West Coast for training drills. In late 1907, however, the battleships assembled in Hampton Roads for the Jamestown Exposition. In classic Roosevelt flair, he responded that he already had the money. Moreover, he also dared Congressional leaders to “try and get it back”. While the leaders fought in Washington, Evans and his fleet resumed their journey. They made their first port visit in Trinidad on December 23, 1907, before continuing on to Rio de Janeiro. On the way, the men performed the traditional ‘Crossing the Line’ ceremony. This was done to reintroduce those sailors who had never crossed the Equator.

Sending a message across the Pacific

When the ship arrived in Rio on January 12, 1908, Evans suffered from gout. Besides, many seamen involved themselves in a bar brawl. Evans set off from Rio de Janeiro towards the Strait of Magellan and the Pacific. When the ships entered the straits, they made a brief stop in Punta Arenas though. Subsequently, they sailed across the perilous crossing without any accident. Finally, the soldiers arrived at Callao, Peru, on February 20. Thus, they began a nine-day celebration in honour of George Washington’s birthday. Moving on, the fleet made a one-month stop at Magdalena Bay in Baja, California, for gunnery exercise.

Henceforth, we bring to you the most common searches on the web regarding the Great White Fleet. 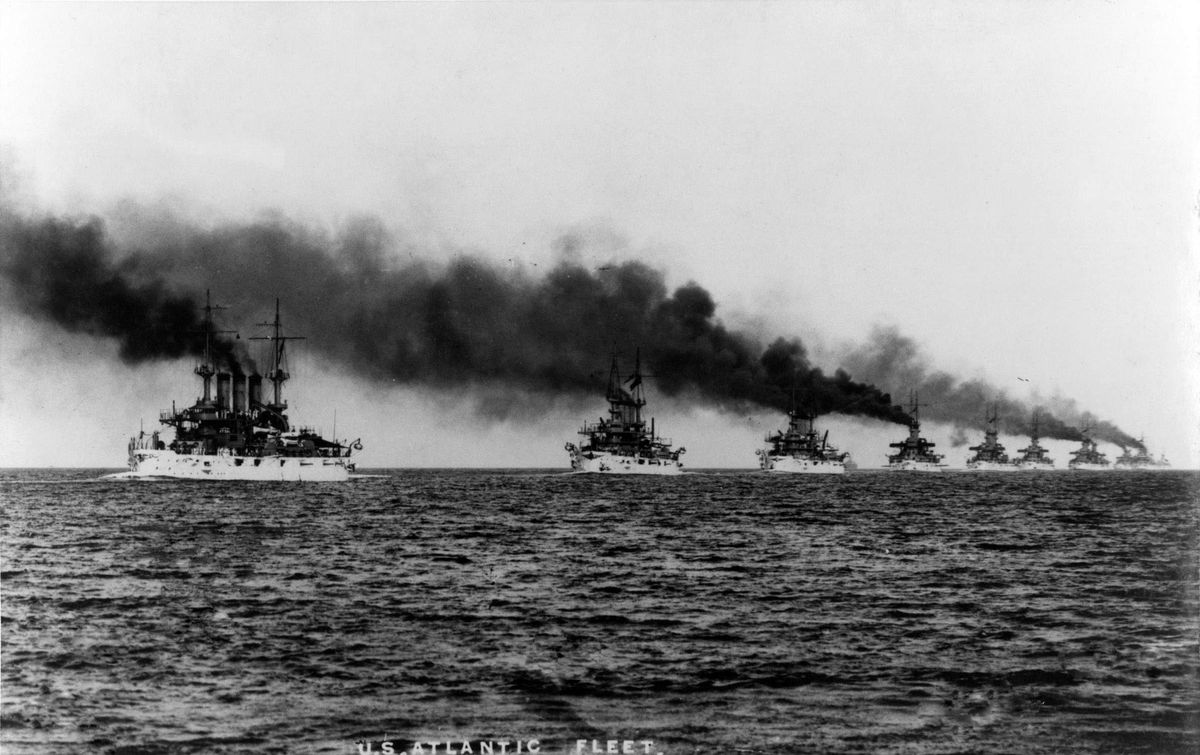 Its purpose was to showcase American naval power to the world. Roosevelt dispatched the Great White Fleet in order to demonstrate the US Navy’s might. He hoped to sway public opinion in the United States in favour of the Navy and persuade members of Congress to support his shipbuilding programme.

Since the ships were painted white, it was dubbed the Great White Fleet.

Likewise, it travelled around the globe.

Furthermore, the ships had their names derived from different states.

Only battleships sailed in this fleet.

There were 16 ships in total.

The Great White Fleet’s tour gave US military troops valuable training in sea duty and ship operations. No serious mechanical disasters occurred, thus divulging the viability of US battleships for long-range operations. The cruise did reveal design problems though. Nonetheless, it did not put the ship’s ability to participate in combat fleet operations to the test. Indeed, the deployment’s success may have contributed to mask design flaws that went unrectified until World War I. Excessive draught, low armour belts, huge turret holes, and exposed ammunition hoists were among them.

Formation steaming, coal economy, and morale all improved as a result of the cruise’s experience. The fleet’s accuracy also doubled, thanks to gunnery training. The expedition did, however, highlight the fleet’s reliance on foreign colliers. It also stressed on the need for resupply ports and support ships.

The Great White Fleet served as a powerful demonstration of America’s naval might to the rest of the globe. It decreased shipping costs by more than 7,000 miles. Moreover, it also helped increase US naval supremacy by allowing warships to transit between the Atlantic and Pacific Oceans. Thus, it went on to become one of the great engineering marvels of the time.

Besides, it was also a pivotal moment in Theodore Roosevelt’s presidency. Roosevelt resigned from the presidency just 2 weeks after the fleet arrived in Hampton Roads in February 1909. 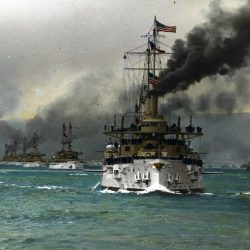